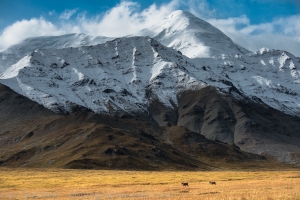 In 2006, my good friend Opie and I tried to ski across the north side of the Deborah-Hayes range. We failed miserably, but it was a memorable trip. The snow conditions were character building, a hard inch thick crust over two feet of sugar. And on our return, the Delta River had opened, so we had to cross knee-deep ice water in our ski boots.

During that trip I kept thinking how awesome it would be to come to the area in the fall. It had the potential of being one of the most spectacular areas in the whole Alaska Range.

So this fall I went for it and the area was amazing, insane scenery and abundant wildlife. The colors were a little behind and the weather…well sucked, but I still managed to get some good images.

I have some submissions and prints orders to fill and then I will get a full trip report up on the blog ASAP.

Thanks for following along!

1 thought on “Back from the Eastern Alaska Range”