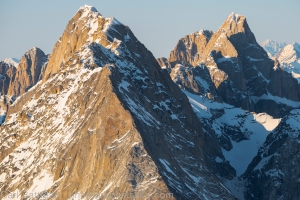 At the southern end of Denali National Park and Preserve is a spectacular collection of granite spires. This fierce group of mountains is rumored to have the densest population of granite towers in North America.

Dead center of Kichatna Mountains is the mighty Kichatna Spire and to the north are Augustin and the other peaks seen and named by Joseph Heron. Climbers didn’t begin climbing in the area until the 1960’s. One of my favorite climbing stories from that area is Conrad Anker’s account of the second ascent of Middle Triple Peak. 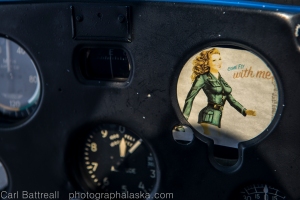 In April I did a fly over of the Kichatna Mountains with my friend Dan Bailey. It took about an hour to get there from Anchorage in his little Cessna. Neither of us had been there before and we were impressed. It was beautiful day, windless and clear. It was a little hazy but the peaks themselves were nicely lit.

Because of their density, the spires are difficult to photograph from the air. Many are hidden from view. I couldn’t get a clear shot of the Triple Peak. It was a little nerve-racking flying amongst them, especially with both Dan and I having our windows open, cameras sticking out. I would have to frequently remind Dan that there were giant mountains in front and to all sides of us. 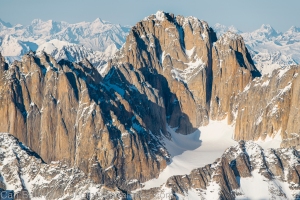 We realized later that it would have been better if we stayed farther away from the peaks. We should have circled all the way around them. I generally prefer to be on the ground or on a adjacent peak when photographing mountains, but it is nice to get a bird eyes view ever once in awhile and there is a perspective that you can only get from the sir.

The beautiful summit of Kichatna Spire